From Gentoo Wiki
Jump to:navigation Jump to:search
Note
Some of the policies and suggestions listed here may need refreshing. If in doubt, please refer to the official standard of GLEP 66.

This article outlines some rules and best-practices regarding the typical workflow for ebuild developers using git.

We have a main developer repository where developers work and commit (every Gentoo ebuild developer has direct push access). For every push into the repository, automated magic things merge stuff into user sync repository and update the metadata cache there.

User sync repository is for power users that want to fetch via git. It's quite fast and efficient for frequent updates, and also saves space by being free of the ChangeLog files.

On top of the user sync repository, rsync is propagated.

This is a summary of all the needed commands:

For details, read on!

Clone the repository. This will make a shallow clone and speed up clone time:

Using the git+ssh:// protocol of course requires the user's SSH public key on the server. If you want the full history, just omit --depth=50 from the above command.

If you're going to make contributions via pull-requests, fork the repository (e.g. via GitHub) and then add it as a remote to your local git clone:

All developers should at least have the following configuration settings in their local developer repository. These setting will be written to .git/config and can also be edited manually. Run these from within the repository you've just cloned in the step above:

This is separate from signing commits or pushes. Gentoo requires that contributions comply with GLEP 76 and the Certificate of Origin is provided by contributors.

For commits or git operations outside of pkgdev, some more (optional) work is needed.

You can tell git to enable it for git format-patch too:

But git does not support forcing it for git commit. Instead, git commit -s must be used. There are workarounds for this on Stack Overflow here.

Technically, it's not required to have a key as a non-developer, but metadata/layout.conf in ::gentoo requires signed commits from people pushing. It's therefore easier with tooling to just use gpg and set it up even if technically as a contributor, your commits don't need to be signed (as the developer pushing it will sign their commits).

Executing the exact gpg command can help with debugging the real issue:

user $gpg --status-fd=2 -bsau 0xLONG-GPG-KEY
Tip
Often, gpg needs to be told which TTY is being used for gpg-agent purposes. Set GPG_TTY=$(tty) in this case.

To get your GPG key run this command. It should be the top line (starting with pub). If you have more than one key with the UID you will need to select the correct key yourself (from the list of returned keys). 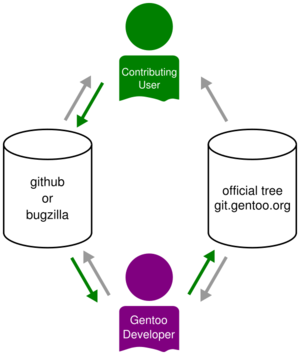 These are just examples and people may choose different local workflows (especially in terms of when to stage/commit) as long as the end result works and is pkgcheck-checked. These examples try to be very safe, but basic.

Before doing anything, make sure your git tree is in a correct state and you are in the branch you actually want to work on.

Pull requests from developers and users

app-portage/pram is a tool to help merge pull requests easily.

Note
Always run pkgcheck before pushing:
user $pkgcheck scan --commits
Note
pram can be used to merge PRs made to other repo than gentoo/gentoo/. Check its homepage or manpage for more info.

Note
Alternatively, you can create a new local branch where you pull in the remote changes instead of working directly in detached HEAD mode on remotes/<remote-name>/<branch>.

Especially staging files can be tedious on the CLI. So you may want to use the graphical clients gitk (for browsing history) and git gui (for staging/unstaging changes etc.). You have to enable the tk USE flag for dev-vcs/git.

Suppose you are making a new revision of the app-foo/bar package—you are removing app-foo/bar-1.0.0 and replacing it with the new revision app-foo/bar-1.0.0-r1. In that case, git (by default) sees two changes: removal of the file bar-1.0.0.ebuild and addition of the file bar-1.0.0-r1.ebuild. If you attempt to view your changes with git diff or git show, you'll get a useless diff containing the entirety of both files.

Git can be coerced into showing you the diff between the old and new revisions even though they live in separate files. The following command-line options specify how hard git should try to find files that have been copied or renamed:

In the common case, searching for renames is enough. You can make that behavior the default easily:

Using the gentoo git checkout as your local tree

If you want to use your git development checkout as your local tree, you have to do two things:

For the latter, there are example hooks for portage and paludis. You should probably skip the files /etc/portage/repos.conf/gentoo.conf and /etc/paludis/repositories/gentoo.conf respectively, so that portage/paludis doesn't mess up your checkout (as in: disable auto-sync).

Warning
The linked hooks are WIP and may be subject to change!

cd into your gentoo Git repository and add these lines to the repo's .git/config file:

git should go and fetch all pull requests, and list them as branches.

Each pull request will now be displayed as a branch name, each with a different name such as "remotes/github/pr/123". For instance if you wish to fetch changes brought by https://github.com/gentoo/gentoo/pull/105, simply type:

to checkout the pull request.

To graft the historical Gentoo repository onto your current one simply run:

The general syntax of the last command is:

(This may be useful if you're not using the official versions of the repositories.)

Once you've merged the history, git will behave as if it is one big repo, and you should still be able to push from that to Gentoo as the head is untouched. Merging the history will remove the gpg signature on the initial gentoo commit (since it is being modified to do the graft).

Normally git repack -a (invoked by git gc) tries to repack everything into a single pack. If your repository contains a few huge packs already (commits from initial clone, grafted history pack), the repack can take really long and be truly memory-consuming.

To avoid that, you can mark the huge pack files for keeping. In this case, git repack -a won't touch those packs and instead focus on repacking everything else. As a result, you can get most of the benefits of repacking with major time saving.

It is important that appropriate credit is given when committing on behalf of others. Git can natively differentiate between who authored a commit and who pushed it (example), and most methods of merging handle this automatically.

If you have applied someone else's changes manually or made local edits to a PR, check that the author field is accurate:

If necessary, amend the commit to give credit where it is due:

If you need to credit several authors, add trailer lines like Co-authored-by: Name Surname <nsurname@example.org> (as currently supported by major Git hostings like GitHub and GitLab) to the long commit description part:

A cli-tool to crawl through pull requests

gengee is a tool that makes queries through gentoo/gentoo/ pull requests. It can show "outdated" pull requests, ie where a newer version is added to ::gentoo tree, where a linked bug is already closed, or where package in question has been removed from ::gentoo. You can use it to query pull requests assigned to certain maintainers, or opened by certain authors.

and so much more.

Check the homepage for an ebuild, info on how to set it up and documentation on how to use it.

gentoolkit above version 0.50 has a tool called merge-driver-ekeyword which can be utilized as a git's merge driver for conflicts with KEYWORDS in ebuilds. This is especially handy for any arch tester. Please see the original announcement.

To utilize the tool, browse to your development repository's location, and add these to ./.git/config

And add the following into ./.git/info/attributes

And summarizing it all, ...