This is yet another guide to install Gentoo Linux on a ZFS-formatted disk. This guide has been greatly inspired by Jonathan Vasquez' Gentoo Linux ZFS guide and Funtoo's ZFS Install guide.

Why yet another guide?

Throughout this guide, I will often link to the official Oracle ZFS documentation, a well written piece of document that gets to the point. Although it has been written with Solaris in mind, you can adapt most commands for Linux.

Download the ISO file and burn it to a CD or USB key. At the time of this writing, the latest ISO file available is: sysresccd-5.0.2_zfs_0.7.0.

There are many ways to go about burning an ISO file to a USB key, dd and unetbootin to name a few. This part won't be covered in this guide. You should look it up in your favourite search engine :-)

Once you've burnt the ISO, power on the computer and boot off the CD player or USB key. The System Rescue CD boots and you should land in the multi-selection entry screen on the right hand side. 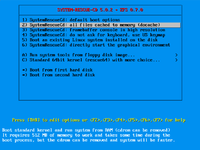 Here, pick either the 1st or 2nd entry, which are default boot options or all files cached to memory. On my server, I had to pick the 2nd one. Your mileage may vary.

After hitting enter, the system will then boot into a Gentoo Linux LiveCD and automatically log you into a zsh shell as root.

We are creating a basic ZFS storage pool named rpool that contains only one disk. In this configuration, ZFS takes up the whole disk. There's no need to create additional partitions with the parted or fdisk commands since GRUB 2 now supports reading ZFS-formatted disks and booting from them just fine.

Here's the command to create the storage pool:

What just happened? Let's try to break down the command:

All in all, zpool create is the equivalent of the gool old mkfs. I encourage you to read two links from the Oracle website here and here. They go over what a storage pool is about and the wide range of scenarios they can be used in.

Let's check to see whether the pool was created successfully:

In ZFS jargon, a dataset is, as its name suggests, a bunch of data. A dataset has several attributes which can be enabled or disabled when creating the dataset. Datasets can be nested, that is, a dataset can be created out of another dataset. When doing so, child datasets will inherit properties from their parents. You can create as many datasets as you wish with ZFS. However, too many datasets will slow down the execution of the zfs command as well as the startup of the system (over 100 according to the FreeBSD ZFS Guide)

In order not to confuse the reader, our file system layout is as simple as it gets:

Feel free to customise this layout and create dedicated datasets for directories such as /usr/portage, /var, /var/log, etc. if you deem they each need to live on separate datasets.

Here are the commands to create the datasets according to the layout described above:

We have to mark the rpool/ROOT/boot dataset as bootable otherwise the system won't boot at all:

We are creating a Swap dataset for the system according to the ZFS On Linux official guide:

Have a look at the link above for an explanation of each option.

Let's check to see whether everything looks good:

Getting the installation directory ready

Remember the /tmp/zpool.cache file I told you about? We are going to copy it over in the installation directory:

Let's not forget the resolv.conf file to get out on the Interwebz from within the chroot:

It's time to chroot into the installation directory:

Important
At this point, the rest of the installation is fairly standard except a few steps that are really ZFS specific. If you're not quite sure about what you're typing, just stop and read the Gentoo Installation handbook.

Let's start off by configuring the system locales:

Set the timezone we are in:

Synchronise the tree and read the news:

Some of these packages haven't been marked stable yet. We need to add manually the list of packages to the /etc/portage/package.accept_keywords file:

We must unmask the libzfs USE flag for GRUB 2 and add it to the /etc/portage/package.use directory:

For the time being, only kernel versions greater than or equal to 4.13.x are compatible with ZFS. You must also install the latest version of genkernel to embed ZFS in your kernel:

genkernel needs util-linux to be compiled with the static-libs USE flag:

At this point, you are all set to compile ZFS in your kernel. Generate a generic kernel config file:

Compile the kernel with genkernel

Take a deep breath and type this in:

What's going on here? I must admit it is a convoluted way to compile the kernel as well everything needed to have a working system with ZFS support enabled. But hey, it works!

GRUB 2 compilation, with the libzfs USE flag turned on, ultimately fails during configure on the first try (you can try on your own before launching this command). Indeed, the configure script scouts for a whole lot of ZFS include files in the /usr/src/linux directory. Unless we compile the kernel at least once before, these files won't be present on the system. We need to generate them in some fashion with genkernel. However, at the end of the compilation process, genkernel calls ZFS commands, which are not installed on the system yet, and fails. We catch this failure with the || shell command. In the second part of the command, we emerge GRUB 2 and launch again the genkernel command. This time around, GRUB 2 will install just fine. Note that GRUB 2 with the libzfs USE flag installs the required ZFS dependencies automatically: sys-fs/zfs, sys-fs/zfs-kmod, and sys-kernel/spl.

Important
Note that the kernel symbols seem to be related to a particular .config selection - if you modify your kernel config you need to rebuild sys-fs/zfs, sys-fs/zfs-kmod, and sys-kernel/spl after the kernel compile finishes, and then rebuild the initramfs.
root #genkernel --zfs --menuconfig all
root #emerge --ask sys-fs/zfs sys-fs/zfs-kmod sys-kernel/spl
root #genkernel initramfs
root #grub-mkconfig -o /boot/grub/grub.cfg

Without the procedure above my initramfs failed with a "symbol mismatch" when trying to modprobe zfs during boot.

Warning
It is highly recommended to save a working kernel, initramfs, and System.map when recompiling the kernel. Simply copy the working files in /boot and add .working at the end:
root #pushd /boot; for a in *`uname -r` ; do cp $a $a.workinz ; done ; popd
root #grub-mkconfig -o /boot/grub/grub.cfg
Then reboot and verify that your .working kernel boots correctly. Then you can run genkernel all you want and you'll always have a working backup that it won't overwrite.

We've got to install the GRUB 2 bootloader in order to boot our system. Let's get GRUB to probe the /boot partition first:

root #grub-probe /boot
Warning
Careful, grub-probe MUST return zfs! If it doesn't, something is wrong with your setup. Start over and make sure to follow every step of the guide. Do not attempt to ignore this step and carry on, you will end up with a broken system.

When zpool created our storage pool, it created partitions under a GPT scheme. In order to boot Gentoo Linux on a GPT partition under legacy boot (BIOS), GRUB 2 requires a BIOS boot partition. By design, ZFS left a very small unpartitioned space at the beginning of the disk. We will use the sgdisk utility, which is part of sys-apps/gptfdisk, to format this free space into a BIOS boot partition:

Let's now run partx to refresh the list of partitions recognised by the kernel for the current disk:

We've got to let GRUB 2 know that our kernel lives in a ZFS partition. Edit the file /etc/default/grub and add the following two lines:

Go ahead and install the bootloader:

Let's check whether the ZFS module for GRUB has been installed:

Finally, we've got to generate the grub.cfg file in the /boot/grub directory so that the boot loader can boot our freshly generated kernel:

The following services must be enabled for ZFS to properly start and run:

Let's exit, unmount everything and reboot into our new system: