Libtool is a GNU project to build libraries in a portable system-independent way. It closely ties into the rest of the GNU Autotools system, but can be used outside GNU Autoconf and Automake as well. Libtool's goal is to produce two types of final products:

Static libraries were the first kind of libraries on UNIX and UNIX-like systems. They are usually just archives of compiled object files. When linking to a static library, this is just as if you were to include more .o files into the final product.

A significant disadvantage of static libraries is that they cannot, by the very nature of the archive they sit in, encode their required dependencies. GNU Libtool has devised a way of encoding all these dependencies. By writing all dependencies into a text file known as a Libtool Archive (.la extension), this information is stored and can be used when linking statically to such a library.

On the other hand, modern dynamic libraries on GNU/Linux encode their dependencies in their ELF header, thus obviating the use of Libtool archives.

Historically, Gentoo has had multiple difficulties with Libtool archives in the past. See a nice documentation of how Libtool archives lead to massive unnecessary rebuilds: https://flameeyes.blog/2011/08/library-soname-bumps-and-la-files-some-visual-clues It boils down to a number of interactions that make Libtool archives problematic on Gentoo:

In all other cases, .la can usually be safely deleted. See the flowchart created by Diego Elio Pettenò (aka flameeyes) documenting this in a more graphically intuitive way: 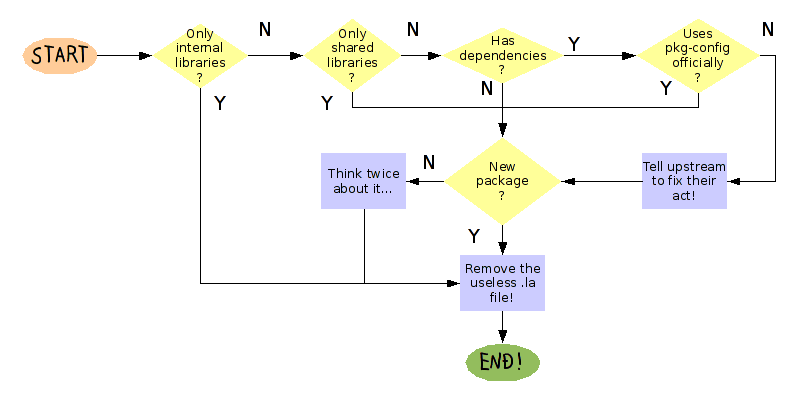 If you're sure you can delete any generated .la files, the recommended way goes along the lines of