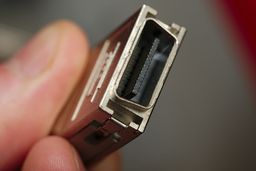 InfiniBand CX4 (pull-latch) connector
This article has some todo items:

This my Gentoo wiki page. Welcome.
I'm with the same (nick)name on the forums. In the Q1 2021 I was asked if I want to join the forum moderation team. After short while of thinking I decided to join. I try to help everybody in the areas that are familiar to me.

I'm just an electrician and sort of an IT guy nowdays who uses Linux daily. I also like to photograph, ride a bike... I like to fix things or find some new use for things. I almost never throw an item away before I absolutely know it's useless or there's no point in fixing it (more work than benefit). Speaking of fixing things, my latest area is repairing old sewing machines. Some are older than Titanic. The ship, not the movie. ;)

I'm the crazy guy who set up InfiniBand network between desktop PC and home server. If you are also interested on the topic, please join us. I'm also in process finding out more of the features of wikitext. ;P I maybe one of the few who run both OpenRC and systemd Gentoo systems.

I also have my own overlay. It has very much experimental stuff. If something has been marked as stable it means I have ran the said program and version on my machines for weeks without problems.

I run Gentoo currently on my Opteron 3380 (AM3) server. It's amd64 (stable) OpenRC+sysvinit based system. It needs to be stable, since it contains my backups. It's also my home server at the same time.

I have convertible tabtop(?), Cepter branded (it's really a Medion... that is nowdays owned by Lenovo), with Intel N5000 CPU. I run systemd init there. So it's a good ground to test systemd related stuff on a real hardware. The CPU is passively cooled and it has a small copper sheet to sink the heat. Since the backside is aluminium, I could spread the heat there too to keep turbo speeds up longer. A project coming up? The machine works otherwise fine, but I cannot find any sensor which detects if the screen has been folded more than 180°, so that I could adjust automatic screen rotation and disabling keyboard and touchpad.

I have started to develop a simple initramfs creation tool which gives user all the ways to customize the resulting initramfs cpio.