Gentoo started life on 1999-10-04. I didn't join in the fun until April 2003. I remembered it as April/May 2002, when I finally got ADSL. However I unearthed my original gentoo-minimal-1.4-rc4.iso CD the other day when I was was looking for bits to get and old A7N8X install to boot. Thats another story.

Having unearthed the gentoo-minimal-1.4-rc4.iso I just had to take it for a spin. After 18 years, it still works. That was a suprise.

So, I have a bootable ISO, a stage1 tarball. What else do I need for an install?

A contemporary portage snapshot and some distfiles.

I still have a rather dog eared, pages out of order, paper copy of the 2003 handbook if I can find it.

So I'll try an April 2003 Gentoo Install just because I can.

Important
ssh and https are not going to work. All the ssh cyphers in use in 2003 have been shown to be weak and have been retired. All the certificates from 2003 will have expired by now

Spin up a Virtual Machine. I gave it 1 core and a 20GB sparse HDD. Remember to put the HDD on an IDE controller and that the drive will be /dev/hda

Should you have real 2003 hardware to hand, you can read the compile commands as they scroll by.

Warning
Do not do an i486 install. The i486 does not have Memory Type Range Register (MTTR) support.

In some video drivers MTTR support is optional, in others its not. XFree86 with the 256 colour VESA driver and twm works. gdm does not.

Fetch the i686-gentoo-1.4-rc4-minimal.iso and attach it as the VM CDROM image.

The original Portage Snapshots have long gone, so in the Gentoo way, we need to make our own.

This cannot be made on our budding install as git is required. Originally, it would have been a download anyway. Clone the historical gentoo-x86 repo and make a portage-snapshot. Choose a date to match the stage tarball you happen to have handy.

Untar the snapshot to /usr/portage.

almost works now. It will complain about a missing /etc/make.conf.

Follow the Gentoo Linux 1.4 Installation Instructions with the exceptions below.

Do not emerge --sync. Make and install a new portage snapshot.

Set GENTOO_MIRRORS="http://bloodnoc.org/~roy/olde-distfiles/" in /etc/make.conf. All my distfiles since mid 2006 are there, including sources tracked down for this trip down memory lane.

Note
There is over 250G of (41,000) distfiles there. That page takes a very long time to autoindex, so its slow to browse

Make an overlay. It will be needed lo work around missing source code files. My overlay is included in the root filesystem image.

At this point, it would be normal practice to install VirtualBox Guest Additions but the 2.4.20 kernel is too old.

See unresolved symbol vunmap. In short "Actually we don't support all 2.4 kernels. The oldest guest kernel which is supported by VirtualBox is the RHEL3 kernel which is 2.4.21 with some modifications, among them vmalloc / vfree."

Skip the handbook section 18.Gentoo-Stats. The code may well be available but the Gentoo server is no longer listening for reports.

Base System Files Missing and Workarounds

Important
If you have any of these files, please email me.

A few sites have archives indexed by md5sum, so knowing the md5sum of the needed files is useful.

Warning
telnet transmits usernames and passwords in clear text, so should not be used

I should have configured telnetd at this point, once netkit-base was installed. emerge netkit-telnetd. Now there is a trap or two for the unwary. netkit-telnetd drops a ready to go configuration into /etc/xinitd.d. However, netkit-base only provides initd and does not install /etc/initd.conf so that it just works.

To get an /etc/initd.conf run

Tab completion is a wonderful thing.

Edit /etc/initd.conf and change the telnet line to read

Be sure you are happy with the other services configured there.

will start inetd which in turn will start telnetd. Root logins are not permitted. Its a security design feature.

net-ftp/ftpd pulls in sys-apps/xinetd, so migrate telnet to xinetd as its so much easier.

telnetd should pull in sys-apps/xinetd too but its unlikely anyone is interested in a bug now.

ftpd is installed but not configured.

nfs version three Is supported. Its probably the easiest way to transfer files out of the Gentoo guest. Its installed and automouts my media server to test media playback.

Tip
Set tcp explicitly. In 2003 the defaut was udp

Start with XFree86. xorg is a thing of the future.

Follow the Gentoo Linux Desktop Configuration Guide with the exceptions below.

Deal with the failures as they arise.

e.g. gtk+ should depend on pango.

x11-base/xfree-4.2.1-r2 which is what portage would like to install, requires

There is no autodetection of anything. Configure XFree86 then try

Read /var/log/XFree86.0.log, fix the configuration, rinse and repeat until it shows 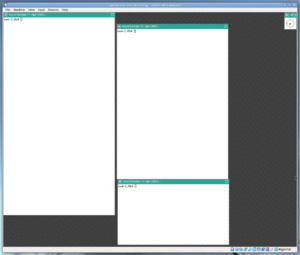 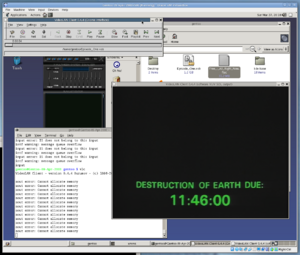 The GNOME desktop from 2003, in 24 bit colour, showing a few open windows.

Follow the Gentoo Linux Desktop Configuration Guide with the exceptions below.

The following files are missing 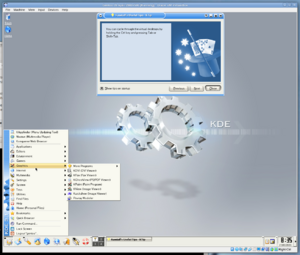 Very few. Tracking down sources is not trivial.

Audio out is on the headphone control, at least, that makes sound output work.

That's there. It needs a wrapper to make it work just with the cowsay command.

No install is complete without "the notorious fortune program".

When fortune provides a quote that was actually spoken after the 9 April 2003, that's the reason.

Plays DVD rips over nfs but only in monochrome.

FLAC and MP3 are both installed but not tested.

Moving the pointer in and out of the VM console confuses the mouse calibration, so some areas of the screen cannot be reached. Move the pointer top to bottom and left to right to the screen edges that can be reached to recalibrate.

Use the workarounds described above.

The Virtual Machine Image was created with

The XML file of the VBox setup is provided.

The other options need VirtualBox Guest additions and our 2.4.20 kernel is too old to support that.

Choose the boot order. Only boot from the HDD if you can type on a dvorak keyboard. Otherwise boot a liveCD and edit /etc/rc.conf for the console and /etc/X11/XF86Config for the desktop.

Telnet should work on boot too. That's an option to fix your keymaps.

Choose the PIIX3 chipset. We have to use emulated hardware as the 2.4.20 kernel knows nothing of Virtio.

Decompress the downloaded image and attach it the primary drive of the first PIIX4 IDE controller. It matters as IDE drives are assigned fixed names.

Under advanced, choose one of the PCnet Ethernet adaptors as that is what kernel supports.

A bootable Virtual Box disk image in a 20GB sparse file for /dev/hda. HDD that size were only a dream in 2003, so that's more that enough. It contains /boot and / (root). root is currently 1.5G.

A very early /home/gentoo, the gentoo users home, is included.

Things you need to know.

I normally use dvorak-uk but this old system only has dvorak. That's what is set everywhere.

xinetd and telnet are both configured and xinetd is in the default runlevel, so telnet will work on boot.

Warning: Things to be aware of

There is no working crypto. All the SSL certificates will have expired. All the cyphers from 2003 have not only bee depreciated, they have been removed too.

e.g. /etc/shadow and portage manifests both use md5. There is no ssh or connections to https://, which means most of the internet.

telnet should work, if you need remote access. That must only be used on a trusted network.

To play with Gentoo as it was, build your own, following the instructions above. The hard work is collecting the distfiles and that's already been done for you.

To just look at it, configure a Virtualbox VM, fetch the hda image, decompress it and attach it as master to the primary IDE contoller, so that its hda. That is required to boot it. If you can type on a US dvorak keyboard, log in at the console.

Tip
telnet in and edit /etc/rc.conf to the console keymap of your choice then reboot

All the source code archive sites around the web that have unknowingly contributed their archives to this effort.

All the contributors to Any Old Distfiles ?