In a true RBAC situation, people are assigned one or more roles which grant or deny particular access.

In an RBAC model, there are a couple of important aspects to have in an implementation.

RBAC by itself is not all that hard to implement. On a Linux system, one can make most, if not all of its behavior based on role assignment done through group membership and group privileges.

The implementation of Role Based Access Control (RBAC) in SELinux is as follows. 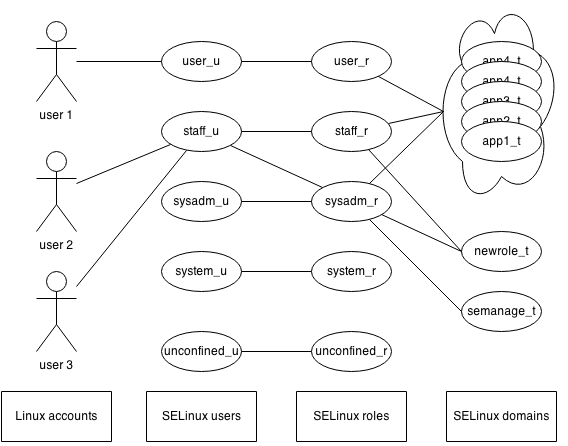 Assigning permissions to roles and domains

In order to assign a domain (or multiple domains) to a role, the SELinux policy needs to be updated to reflect this. For instance, to allow a role oper_r to manage the Zabbix monitoring infrastructure, the following policy would be defined:

This simple call allows the oper_t user domain (the default domain that users in the oper_r have as their logon or runtime domain) to administer the Zabbix environment, as well as stop/start/restart the service and edit the Zabbix infrastructure resources.

Depending on the purpose and the policy design, either the permissions of a user domain are enhanced (such as with the zabbix_admin example), or the role is allowed to transition to another domain. The latter is in use more when applications are granted (in which case a domain transition is allowed towards the application domain).

Additional roles can be created through policies.