The SELinux policy is what contains all the rules that SELinux will enforce. It segregates control from definition, making it possible to distribute the same access control rules towards a multitude of systems. 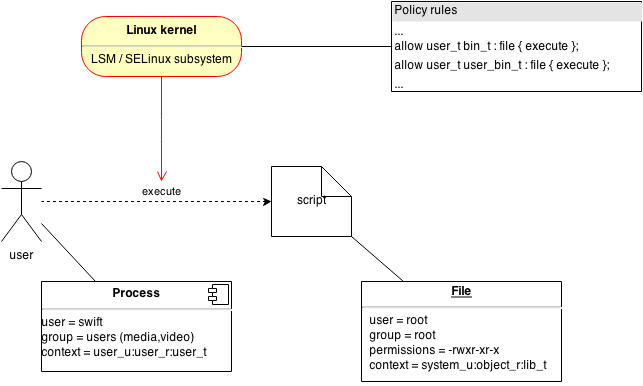 In order to make the SELinux policy more manageable, SELinux supports multiple policy modules. Similar to a kernel configuration, where the entire Linux kernel can be build in a monolithic, single image, but also in a base kernel image with additional, loadable Linux kernel modules.

The base SELinux policy contains rules that cannot be loaded/unloaded, as well as the definitions for the core Linux system controls. Unlike a Linux kernel, even the base policy module can be replaced - but a base policy always needs to be loaded.

Next to the base policies, individual policy modules are defined. These contain all the rules related to an application (or functional coherent set of applications).

The SELinux policy rules are compiled in a binary format - the human readable rules are not loaded verbatim into the SELinux subsystem. The binary representation allows for much smaller memory requirements, as well as optimized policy decisions.

This binary format might change as features are added. When this occurs, the binary version is increased. The table below gives the current list of binary versions and their added feature.

It is possible to maintain multiple policies on the system. This differentiation is supported through the concept of policy stores. A policy store contains a single policy build, together with various SELinux configuration files used by the SELinux user space (such as default contexts, user mappings and so forth). The active policy store is defined through the /etc/selinux/config file's SELINUXTYPE variable.

Next to targeted and strict, administrators can opt for mcs to allow categorization of resources. This is useful on multi-tenant systems such as web servers, virtualization hosts, ... where multiple processes will be running, most of them in the same security domain, but in different categories. Note though that to take advantage of the additional category support, either the applications themselves (such as the web server or hypervisor tools) need to configure the SELinux categories (so they need to support SELinux) or the administrator will need to script around to start the individual instances with separate categories. Otherwise, mcs is just the same as targeted or strict.

Finally, Gentoo also provides mls to support a true multi-level security system. However, MLS is currently still considered experimental in Gentoo and as such not recommended.

More information can be found in our SELinux policy store page.

To rebuild the existing policy (i.e. build the final from the binary base and policy modules), it is sufficient to call semodule:

This will also reload the policies.

Specific modules can be unloaded and loaded using semodule.

In order to load it again:

It is possible to disable dontaudit rules so that SELinux policy deny decisions are always logged, even if the policy developer configured it not to have them displayed.

The existing policy can be enhanced using the selocal script. This script allows for additional SELinux rules to be defined.

For instance, to assign the zabbix_admin interface for the staff user:

The overview of rules managed by selocal can be displayed as follows:

Alongside the standard policy packages, two specific ones are provided:

The latter builds an entire set of additional policy modules which cannot be loaded individually (due to cross-dependencies).

Important
The load operation is not made part of the install phase of the ebuild, but post-install. This is because policy loads might fail if additional SELinux policy modules will be loaded later (through other packages). Making the load part of the install phase would roll-back the changes, which we don't want.
Retrieved from "https://wiki.gentoo.org/index.php?title=SELinux/Policy&oldid=251848"