Building on Gentoo on Mudan, which is an Applied Micro X-Gene 1 CPU, we have Gentoo on Hawk.

The X-Gene 3 was sampled, then the story passes to Ampere Computing.

The board is intended to be used in an openEDGE half width 1U chassis, which makes finding a commodity case a challenge. However, it does expect standard ATX power, so powering it up and operating it is not a problem.

Warning
All the electronics in the Hawk are static sensitive. Antistatic precautions are required

The Hawk is intended to be fitted to a 1U half width chassis and use six fans for cooling.

Use the rescue mode of debian-10.4.0-arm64-xfce-CD-1.iso to boot, write efivars and so on. It will only drive the serial over LAN console.

dd it to a USB stick. The Hawk firmware says it can boot from CDROM but that's not confirmed.

Do use Registered ECC DIMMs. I did test unregistered non ECC RAM from my main AMD64 system and it would not boot.

All the reference material says to fit in pairs but my Hawk is running quite happily on one. In the CH0_DIMM0 slot. The eMAG 8180 CPU can support two DIMMS per channel but only DIMM0 sockets are fitted on the Hawk.

The reference material uses different identifies for the RAM. The above is the silk screening on the board.

Take your pick from SATA3 or NVME 4 lane PCIe. Being lazy, I put the Mudan SATA boot drive in to see what would happen. While the USB hardware and drivers are USB3, only USB2 ports are fitted. That's OK to get you going but not for long term use.

Notice the absence of SATA on the PCIe bus:

The kernel needed three changes from the X-Gene 1 kernel:

The Board Management Computer (BMC) is a ST2500. Use impitool on a remote host and enjoy all the good things that IPMI offers.

Activate the ADMIN login with password ADMIN, if required. e.g. after a factory reset.

Then get three ipmi shells with

One for power control, one for the debug Serial over LAN (SoL) console, and one for the SoL console. Using each ipmi shell,

There are two more consoles too:

The SoL console, VGA console and the KVM console all show different things.

on the debug SoL console at power up.

then the RAM in MCU 4 is probably faulty.

There is a web interface at https://$REMOTEHOST. openwebstart is not required.

With the hardware configured as below:

All power readings measured at the input to the PSU.

For completeness. The power factor is about 0.6. That's pretty terrible but its not user adjustable.

The serial port is ttyS0 until openrc starts, then it becomes ttyAMA0. The kernel command line needs

to see everything except a login prompt on serial console.

The references say that it is PCIe Gen 3, backwards compatible with Gen 1 and Gen 2. I can report that out of three cards I tested two caused boot failures in the firmware.

The Hawk does not support GIC_v2. Use

to change to gic version='3'

Without a case, the Hawk parts were spread out on the anti-static mat on my electronics workbench as illustrated. 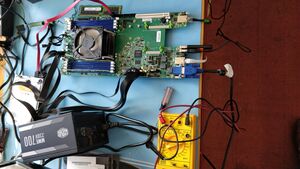 An 8cm fan can be retained to the heatsink with a couple of cable ties as illustrated.

Warning
This is not adequate cooling. With 24 cores running, the CPU is 70°C above the ambient temperature 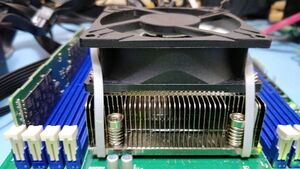 The fan is spaced off the heatsink with normal fan fixing screws. This was required to prevent the rotor clipping the heatsink fins.

There are a few disadvantages to this.

Whatever, the CPU needn to be kept under 96°C, which is the Upper Non-Critical temperature.

There are images of a similar motherboard fitted with A Supermicro SNK-P0050AP4 cooler. Start reading at eMag Workstation by Avantek and zoom into the images in the linked hardware review. The part number on the side of the CPU cooler is clearly visible in one of the images.

Having fitted the Supermicro SNK-P0050AP4 cooler to my Hawk, I can say that no metalwork is required.

The CPU runs less than 40°C above ambient with all 32 cores building a kernel.

Removing the 1U heatsink

My Hawk was fitted with far too much thermal paste and the heatsink lifted off the CPU. Thermal pads tend to set hard and bond the heatsink to the CPU, which for socketed CPUs removes the CPU from the socket. The eMAG 8180 is not socketed. Anyway, it did not use a thermal pad, so all was well. 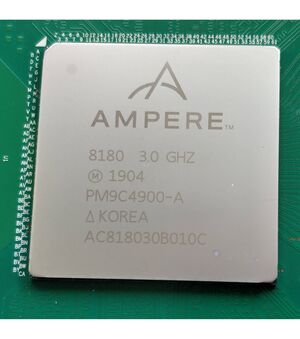 Assemble the narrow mount to the SNK-P0050AP4 cooler. Remove the fan housing by sliding it vertically off the heatsink. It has a retaining screw on the top. A trial fit should not be required but measure twice cut once. 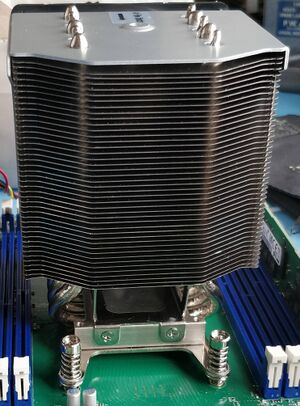 The 4U cooler resting in place

A few words about thermal paste.

Thermal paste is actually a fairly good thermal insulator but its a much better thermal conductor than air. When two flat plates touch, they touch at exactly three points, like a tripod. In our case, the plates are the the heat spreader on the top of the CPU and the CPU cooler contact surface. Other than the three points, there is a thin layer of air between the mating surfaces.

The idea of adding thermal paste is to displace the air. No more. Its very easy to use too much thermal paste. Its also easy to fix.

Put the thermal paste in and assemble the heatsink to the CPU, then remove it. If the paste covers the CPU and squeezes out of the sides, that's far too much. Clean off one surface only (about 50% of the paste) and test again. 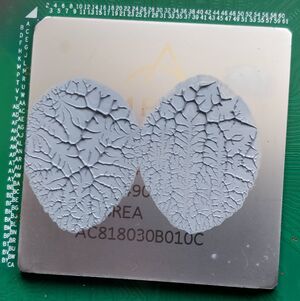 This image confirms the dial gauge measurements made with all the pieces separately. That the cooler fits properly.

The heatsink fixing, which defines the plane of the heatsink and CPU coplanarity is in error by 0.6mm on my sample. That's a huge error to take up with thermal paste. I slowly added more thermal paste.

The voltage regulators, there are lots, are located in the area around the 12v_ATX connector.

Convection cooling is not adequate for voltage regulator cooling. The first one that complained was the PMD_VRD_Temp, which went critical even under light loads. Forced air cooling of this area is essential if the server is going to be operating at any more than a tickover.

From the ipmitool shell

just once, followed by

B is the desired fan speed in the range 0..100. Fan speed is a decimal number.

Fan settings are not saved across BMC power cycles. They default to 100% which is noisy but safe.

User changes to sensor thresholds are lost across BMC power cycles too. This results in lots of spurious alarms when the Hawk is used with non-standard cooling.

I did look on the web for a right angle PCIe riser card. There are lots but they are all the wrong handedness. However, I found a PCIe extender card in my box of bits which is just enough to lift a normal card bracket above the switch. However, with vertical mounting, the back of the PCIe card fouls straight SATA connectors.

The Hawk back panel is too wide for a commodity PC case back plate opening. Maybe it can be made to fit with some metalwork?

eMag Workstation by Avantek is the eMag Raptor system in a modified case. The Hawk and Raptor are different form factors but there may be some hints there.

There is a Printed Case if you have access to a 3D printer. It also deals with the cooling problem.

A Sun U10 case, with the electronics removed is about right. 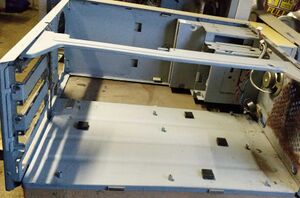 Sun U10 Chassis with Electronics Removed

To fit the Hawk board the old motherboard stand offs need to be removed from the case and two small hacksaw cuts are required to allow clearance for the VGA connector.

Hawk Placed in U10 Chassis

Careful placement allows unmodifed half height PCIe cards to be fitted but there is no support for the backplate.

Note
The PCIe extender can be seen in the PCIe slot in the above image.

Full height cards would need the motherboard mounted on smaller stand offs than the 15mm x M3 I had to hand. That's probably worth while. My system uses spacers, for a screw each side, as its easier to slot a hole for a screw than to move a tapped hole that's in the wrong place. 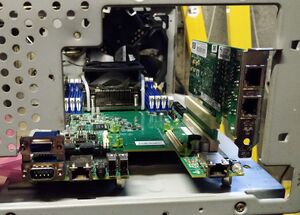 U10 Chassis with VGA Clearance

The new ATX PSU is in. Two small hacksaw cuts, or a touch with the angle grinder, are required to clear the power input connector.

The original front fan has been replace by a 140mm fan. That's almost the width of the Hawk board, so there should be plenty of cooling for the on board power regulators. One of them gives critical lower critical temperature going low warnings now.

Its been running for a few weeks now but with no more than 24 cores until the CPU cooling is fixed.