livepatch is a Linux kernel facility that allows to build a kernel module to update a running kernel without requiring a reboot.

Elivepatch is a client-server infrastructure to automate the creation and distribution of those modules. 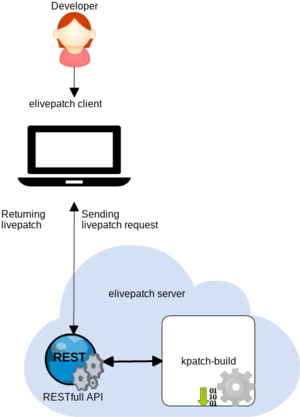 The software is mainly two components:

The machine will need to have enough space to build several kernels and the toolchains used to build the original kernel.

The client is as well a Python program.

The example.patch is a diff from the original kernel sources the file.config belongs to (the elivepatch-client figures out the kernel version from it).

The command will contact the elivepatch server and request a livepatch module matching the patch provided.

It will automatically produce a cve.patch from the CVE advisories for the current running kernel and request a livepatch module.

It could be used as a cron job command to keep an always-on machine up to date security-wise.

elivepatch uses kpatch under the hood and the system has the following limitations:

The livepatch generation process needs a toolchain matching the one used to build the original kernel. Depending on the number of system to serve, this will require a large collection of gcc.

Automated live patching creation needs to trust the diff provided. It is advised to keep the process containerized. For this purpose Docker images are being worked on.

This project is part of GSoC 2017 and the code is written by User:Alicef mentored by User:Gokturk